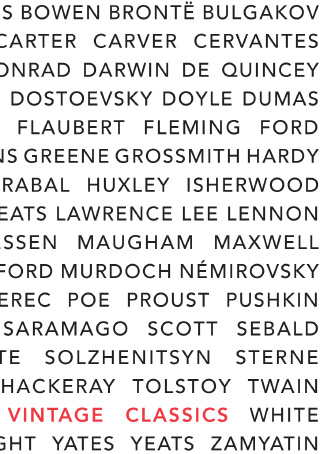 To mark the forthcoming 10th anniversary of the relaunch of Vintage Classics, my publisher has invited each of its authors to select their 5 favourite books from the catalogue.  The wonderful promise made in return is: ‘Whenever you press your copy into a friend’s hands or find it has wandered off your shelf onto someone else’s, let us know and we’ll send you another.’

The choice was difficult, so I drew up a longlist.  Some of the covers were as familiar as old friends. Lingering over the bright yellow of Tender is the Night, I hesitated: if it was simply familiarity tugging me back, should I resist and think more carefully?

Even now, for example, the pink blossom of Faulkner’s The Sound and the Fury, with its sharp thorn spikes, reawakens the sense of anticipation I felt when, having purchased the book, I’d drawn my hand across the cover and wondered what I’d find inside.  Weeks passed before I tucked in, and that became a ritual. Seeing the image in the catalogue, there was again the thrill that had come when I’d eventually read sentence after sentence so completely unexpected and exciting and different and new and thirst-quenching that my map of the written word was redrawn.

Whittling the Vintage Classics catalogue down to five seemed, at times, to be a delightful exercise in the absurd.  Finally I decided familiarity could play a valid part, and I’ve no problem confessing that when it came to it, looks mattered.  Here’s that longlist.  The asterisks, to reverse Vonnegut’s approach in Galápagos, denote those which made the final cut.